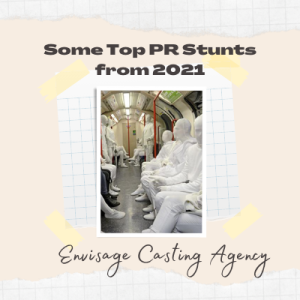 Getting visibility for your brand within a world of lockdowns and reduced activity wasn’t easy in 2021. Not surprisingly, companies turned to PR stunts as a way of attracting attention.

Back in April, Tesco took the unusual step of running a campaign to encourage people to go to their local pub rather than buy alcohol from their stores – just as a way of supporting small businesses reopening after lockdown. With everyone more accustomed to seeing the store promoting its own products, this PR stunt quickly went viral, ensuring shoppers had a positive impression of the Tesco brand, while helping local pubs.

Across the Atlantic in Manhattan, Rihanna caused passers-by to stop in their tracks with one of the most outstanding stunts of the year. Having just launched a new fashion special – the Savage X Fenty Show – on Amazon Prime, she wanted to promote both the show and the clothing line. The resulting stunt was incredibly simple, but attention grabbing. A building in a busy Manhattan neighbourhood was taken over by models of all sizes and genders wearing the new Fenty lingerie, undertaking live performances within all the brilliantly lit windows! Not surprisingly, everyone passing by stopped to watch, and filmed it for social media.

Equally simple and dramatic was publicity surrounding Adele’s comeback. Everyone was querying why massive ‘30’ projections were appearing on landmarks worldwide, from the Eiffel Tower in Paris to the Empire State Building in New York. It proved to be a massive talking point, even before the announcement of Adele’s comeback campaign was made.

Not all PR stunts proved successful in the way they had been intended. Most notably was Brewdog’s Gold can. In a dramatic announcement, Brewdog announced that it had hidden 50 solid gold cans within its normal packs of beer – a real Willy Wonka style PR stunt. Sales of the Punk IPA went through the roof. The only problem was that none of the so-called gold cans were actually sold gold – just gold plated. Winners of the cans were not pleased, and complaints began to roll in. Eventually Brewdog had to be apologise to the ÅSA for running a ‘misleading campaign’, ensuring the brand is now remembered for all the wrong reasons. Consumers and businesses continue to mention the stunt, as an example of what not to do! Instead of positive PR, it became purely controversy.

So what PR stunts will make the news this year? Only time will tell – but what is certain is that there will be some spectacularly stunning and inventive ones. Who knows? It could be your stunt that everyone is discussing next or making waves on social media.

If you are planning any PR Activity this year and need actors or extras then please get in touch.

Extras for Commercials Commercials need to keep the viewers attention. Just watching and listening to…