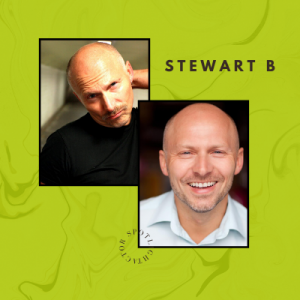 Stewart has worked with us at Envisage on a variety of different events from Brand Ambassador to Father Christmas and other acting roles. We are pleased to introduce you to him as one of our key actors in the South and London.

Hi Stewart, take it away – please tell us a bit about yourself? How long have you been performing?

“Hello all, my name is Stewart James Barham from the beautiful town of Hove – I have been acting for over 22 years and have been with Envisage for over 6 cracking years.”

We will get straight into it then, what are your main aptitudes with acting?

I have a very good ear for accents, this helps me pick them up very easily.” Stewart sniggered at before saying “You can usually catch me talking to myself practicing my accents, people might think I am losing the plot. I have really perfected my Shakespearean accents, and really worked on them during the time I worked with the Brighton Shakespeare company,”

How did you get into acting, what were the reasons and why did it interest you?

“That’s a good question, it takes me back a long time when I was a kid” “I use to do lots of role play as a child, from pirates to army men, I’ve always like the idea of becoming other people and immersing myself into a different world and this has stuck.”

Relating to your previous question, what is it about acting that keeps you getting up in the morning to perform?

“I would say that it is still similar to the feelings I had when I was younger, the unknown of acting is exciting – throwing myself into situations where I don’t know where I will be performing, who I would be working with and what the piece is going to be about”. “It’s about taking a leap which can be scary but makes you feel alive and constantly on the ball”.

Lastly, what would you say has been a key moment in your career, are there any notable roles you have had?

“It has to be playing the lead in an independent feature film called high water [this is still in post-production because of coronavirus] playing a Journalist who returns to Brighton following death of his estranged son, so he starts to investigate himself as the story does not add up”.

Stewart also promptly remarked: “Can I also say that I have managed to travel to some really nice places? I was flown to Madrid for a football commercial and toured the of of the UK and Ireland with a theatre show for the last 7 years”.

To find out more about Stewart or any other actors on our books, please click here.

Are you seeking professional models for a photo shoot? Look no further. Envisage Casting Agency…